After much deliberation, I have decide to do an E-Bike conversion on my 2009 Surly Long Haul Trucker. 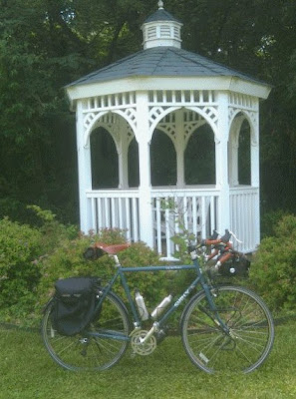 I have put over 20,000 miles on the LHT in the past many years.  Lots of touring, commuting and recreation.   I really enjoyed that bike.  Since getting a Felt E-Bike and getting older, the LHT just didn't get used as much.   It was set up great, with White Industry Hubs in custom wheels.  A real nice bike.

The Felt E-Bike is also nice but the Shimano Steps system (6000 series) is no longer made or supported.  The Felt Bike frame motor mount will not accept the new Shimano Steps Motor systems.  And the battery options for Shimano is extremely limited.  The batteries and motor controller are proprietary.   So while the Felt is still nice, a e-bike conversion of the LHT for Touring seems like a interesting and economical project.

Achieve a throttle option if the situation is needed.

Achieve optional battery choices for given situations.  Multiple batteries would allow adjusting the battery load for the needed distance.

First Concern Braking:  Disc brakes would be a more 'sure footed' braking option.  But the 2009 LHT has Rim Brakes.  With recent new wheels/rims, and KoolStop  - KS-MTTDL brakes, I think that the braking should be fine for a Touring Bike that travels on paved roads and maintained Rail Trails.  The fact that the rim brakes are mechanical and the brake pads are very easy to inspect is a maintenance and safety plus.

Second Concern motor placement:  I recently build the LHT wheels using very nice and expensive  White Industry M15 hubs.  It would seem pragmatic to use them.  And now that I am very familiar with Mid-Drive Systems, a Mid-Drive motor instead of a hub motor seems to be the practical option.

Third Concern change of shifting.  I considered a Rohloff SpeedHub but decided against it.  They are very expensive and with the White Industry M15 hubs as discussed before, I think the pragmatic approach is stay with the wheels (front and rear) as built with the Shimano XT derailleur/gear system. (although the thought of a Gate Belt & Rohloff Hub is very intriguing, it is beyond the scope of this project)

Forth Concern shifting and braking levers.  The current LHT setup is with WoodChipper handlebars with bar end shifters.  This is a good time to put a Jones SG 2.5 Aluminum Loop H-Bar on the LHT.  I have that Jones bar on my Felt and it works great for my purpose.   This would require changing shifter(s) to use with the existing derailleur.

A mid-drive motor would eliminate the need for a front chain ring derailleur/shifter but I will obtain the pair for the conversion and use until the motor kit is obtained.

We will see if I can temporarily adapt the dropbar braking levers to the Jones Bar until the Motor kit with Brake Levers is obtained.

Stay tuned for the conversion step postings as they happen. 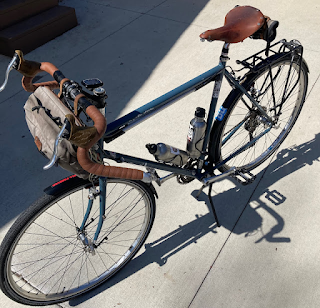 Next:
The Salsa Wood chipper Handlebars have been removed.  It has been determined that the existing brake levers will not be installed even temporarily on the Jones 2.5 Loop H-Bar when it arrives. 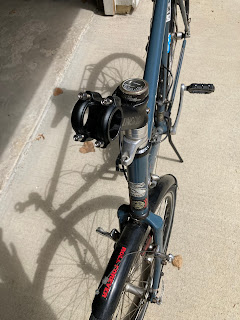 New Brake Straddle Cables are now ordered to be ready for the installation of the new wire & levers when they arrive. The Straddle Cables were a little difficult to locate.  They are not as popular as they once were.  I made sure to order a few of them to have available in the future. 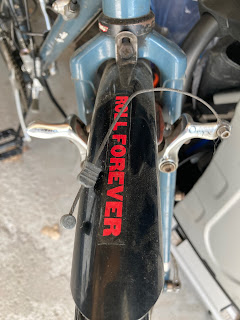 The Jones H-Bars arrive and the installation begins: 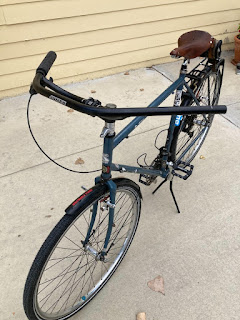 The Jones bar is an easy install using the existing stem.  It will take a bit of adjustment to get the level just right.  The rear shifter is installed and it functions perfectly.  Still awaiting new brake levers but I put on one of the great Jones Bar grips.  I believe I will be able to but on the brake lever without having the remove the grips. 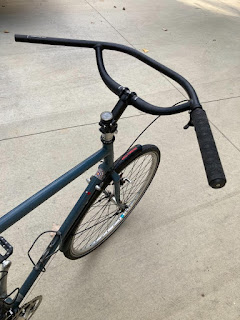 I am anxious to ride the new set up prior to proceeding to the actual E-Bike motor step.  I want to confirm that the bike is dialed in and will be suitable for the E-Bike conversion.

Brake Levers:
The existing brake levers would not work, so inexpensive "Chooee Bicycle Brake Lever,Mountain Bike Handlebar Brake Lever for MTB, Black" were purchased and installed with new wiring. The front derailleur was removed making the Bike a 1x9.   The bike will now be tested for a short time to confirm that it is working properly and the fit is dialed it before the e-bike conversion continues.

The next steps:
Select Electric Motor
Select Battery or Batteries
Get bottom bracket and crank arm removal tools
The Bafang BBS02b 750 was the chosen motor. I have put over 5,000 miles on the Shimano Steps 6000 series, so with that experience I knew I wanted more hill climbing ability and a little more sustained speed.
The BBS02b has 120 nm of torque where the Shimano Steps has 50. This increase should do nicely on hills.  I plan to program the 9 assistance levels to provide more options than the 3 options of the Shimano Steps system.  This hopefully may prove to be more efficient.
The Shimano Steps e6100 battery has 418wh.   This limits the daily mileage to about 50 for a loaded down touring bike, in eco mode with average speed of about 14mph.  The battery options with Shimano steps is a challenge.  It is difficult finding a spare battery.
With Bafang, the Battery options are many.
My first battery with the Bafang will be a small 48w 10ah. It is a small triangle like pannier that is 3.5 inches wide and 14 inches long.  The changer is suppose to fit in the pack as well. 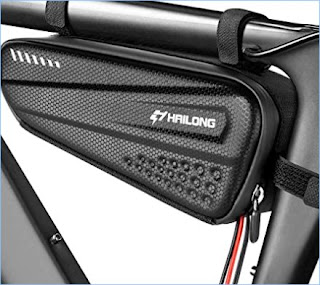 My calculations are that this battery may provide close to the same range as the Shimano Steps battery.
I believe my current touring with peddle assist in  battery use will be 10wh per mile.
Testing will see if my estimates are close.
If this is the case. I will get another of the battery and configure the two battery packs on the rear rack probably above the regularly used panniers.

The tools needed for the Bottom Bracket removal:
Crank arm puller
8mm Allen Wrench
Bottom Bracket socket
Pedal Wrench
Socket Wrench
PVC pipe for additional leverage
The process to remove the bottom bracket is illustrated in numerous videos.  It is not an easy task, but then again not to difficult when you have the correct tools.
Some Tips
from my experience removing a bottom bracket
that had not been replaced for about 5 years 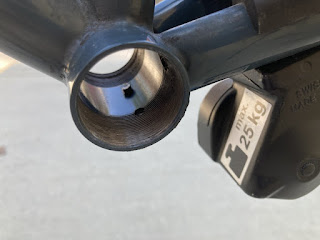 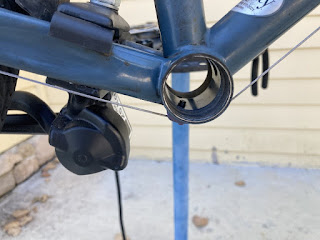 Now just waiting on the motor.

It was nicely packed and included to gear shift sensor and cable add on that I requested that will connect to the Battery. 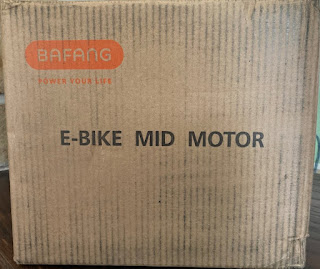 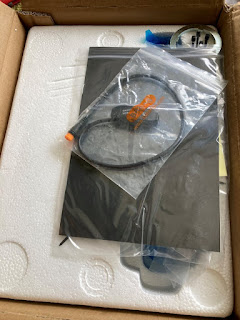 The Installation wasn't too difficult.

The BBS02b motor fit nicely into the 68mm bottom bracket frame.  The under the bottom bracket cable guide had to be adjusted so it's attachment screw did not go too far into the bottom bracket frame.  A couple of small washers did the trick.
There are very good instructions available on YouTube.
I did not use a torque wrench on the tightening rings for the motor. 50-60 nm of torque is recommended.  I did not read or hear anyone saying there had be an 'over-tightening' issue.  I muscled my way through it and got it as tight as I could.  Some even recommend using a mallet or hammer to get it 'extra tight'.  I was careful not to have the motor shift and interfere with the shifting cable that runs under the bottom bracket frame.
Interesting that I found the most challenging part of the installation was the speed sensor.  The LHS spoke holder created difficulty mounting the sensor on the non-drive side of the bike.  Getting the correct position for the cable length and magnet position on the spoke took a bit of time and adjustment to get the speedometer to function.
The first battery attachment and run through before the wires were secured proved that everything was working.
I spent a little time getting the cable wires arranged.  I used a split cable wrapping product to route the cables.  The finished product looks like this:
The battery is attached to the rear rack using velco.
There is room for two of these batteries sitting side by side on the rack. Plenty of room for Panniers. 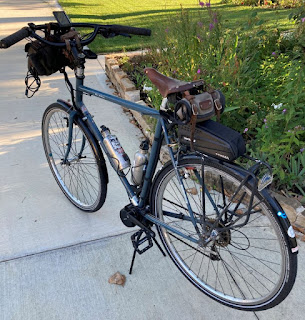 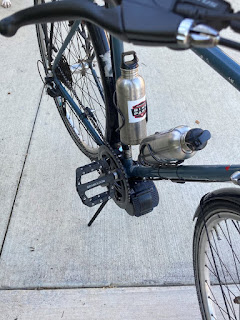 Still room for water bottles and open space in the "triangle" 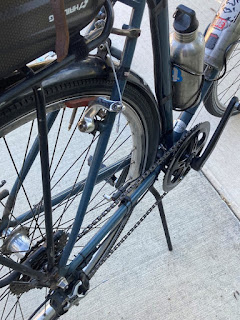 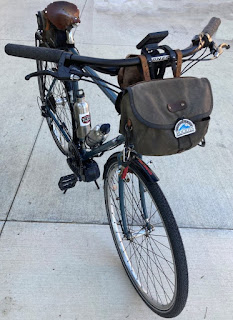 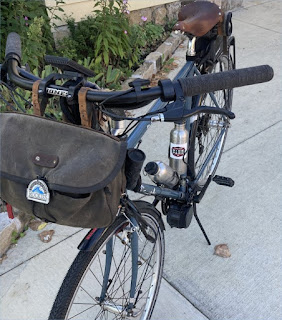 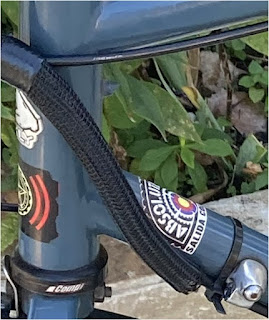 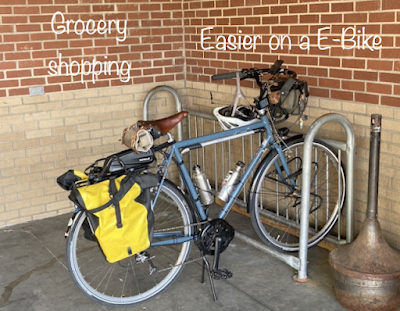