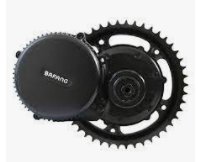 I recently was looking into doing a conversion of a Bicycle to an E-Bike using a Bafang Mid-Drive Motor.  There are a number of seeming "secondary sellers" of the Bafang products. Some even seem like extensions of the Bafang Company.  It became a little confusing about what motor was what.  And who did the support and warranty.

I asked a couple of  "resellers" for information but received vague non-answer replies.

(note: sometimes a "Your connection is not private" is shown when going to this website)

But it could be something else.

There was also the concern that there didn't seem to be Company approved sellers for the Bafang Motors in the United States.

On Twitter, I asked the question to what appears to be the actual Bafang Company.

@BAFANGElectric
Bringing power to your life with #ebike systems engineered to make you smile!
Suzhou, Chinabafang-e.com/en/home/Joined May 2019

Question:
When researching @BAFANGElectric E-Bike motors, the BBSHD & BBS02 motors are referenced in many websites & forums but not the Bafang website.

They replied:
Thanks for the question!

These are old product names and many are available on the market where importers may have bulk purchased in the past, but Bafang does not sell drive systems direct nor advise DIY projects using them. The new models will benefit from the extra years of product development invested into them. Always fully investigate any seller, and product specs and provenance yourself before purchase.

Although this answered my question and I now believe that the BBSHD & BBS02 motors are "old model" motors, other questions immediately come to mind.

I am still a bit concerned about Bafang being used for a conversion in the United States.